The IAB-MIF NMR Room
Back to HaMR Core 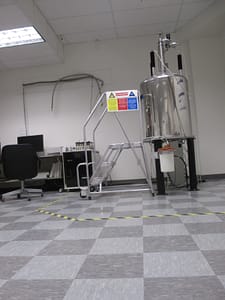 The 300 MHz Varian NMR has a broadband probe tunable to most nuclei including hydrogen, carbon, fluorine, phosphorus, nitrogen, and vanadium. It is capable of one- and two-dimensional NMR experiments. It was obtained through a grant from the National Science Foundation Instrumentation and Lab Improvement (NSF-ILI) program. 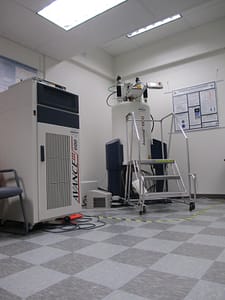 The 600 MHz Bruker NMR system includes a broadband liquids probe that can be tuned to most nuclei, an HR-MAS probe designed for proton and carbon NMR on tissues and other semi-solids, and a CP-MAS probe tunable to most nuclei for solids. It has a 60-position sample changer that allows for complete automation of experiments using the liquids probe.

Beginning July 1st, 2018 all projects within the MIF must have a current Project Registration Form on file.

Offline workstations in Reichardt room 136 and 172

Each workstation has TopSpin and Mestrenova installed for NMR analysis

Back to HaMR Core